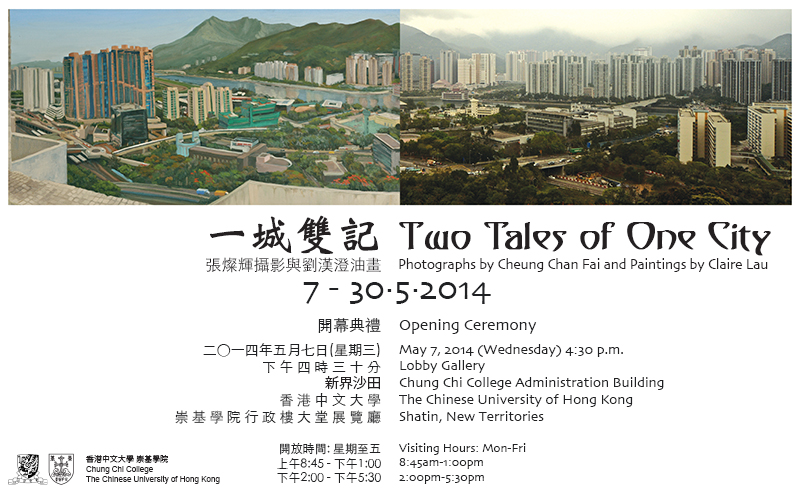 Prof. Cheung Chan Fai and Claire Lau have both been fascinated by the experience of the landscape for a long time. Both search for unusual ways to observe and understand the space which we occupy. Gazing upward while inside a building, looking down to the city or fields from a plane, Prof. Cheung's photographs capture curious perspectives of the land. Claire climbs atop skyscrapers or rooftops and investigates the systems and structures of the city through painting large landscapes on site. Having both lived abroad and regularly travelled, the two artists find Hong Kong's juxtapositions of heterogeneous elements very unique: skyscrapers leaning against wild forested mountains, old village houses beside modern high rises, and highways winding between buildings and hills, linking everything. Realizing this shared interest, the two embarked on a project to describe the same locations through their respective mediums.

Claire’s paintings respond to elements that speak to her at each location, be it the air quality, the dynamic infrastructure, or the lush greenery unfolding by the hillside. Standing at the edge of rooftops, she observes the spaces around her, from her feet to the horizon and as far as her head can turn. While combing these different angles onto a single flat surface, Claire rebuilds the landscape with curved perspectives that often remind one of wide-angle or fisheye lenses. But these compositions are actually drawn purely form from experience, and are a result of turning the head, hence shifting the distance between the artist and the subject. However, it is true that this idea of viewing space from a single stand point and turning the head has only been widely explored by artists after the advent of the camera. Previously, artists predominantly either used stand-still linear perspectives established in the Renaissance using straight focal lines, or, when painting panoramas, used shifting perspectives that also implied shifting the position of the viewer (this is also the case in Chinese ink landscapes). However, when photographers began to create panoramas in the 19th Century, they would stand in one spot and rotate their cameras, resulting in a combination of images that create curves, contradicting the mainstream Renaissance theories of straight line perspectives. By the 1970s and 80s, some artists began to explore this way of viewing space, but these have not gained much attention until recently when perceptual landscapes and interior paintings have resurged into the contemporary art scene.

While working on this project, Claire and Prof. Cheung have made some interesting discoveries for themselves. Looking at Chan Fai’s photographs, Claire realized that her brain inadvertently rationalises the expanses around her and makes transitions between viewpoints sometimes too smooth and logical. This  “normalises” the landscape for the viewer and can reduce the impact of the scene. However, the brain is still flexible in its creation/depiction of space. It chooses its emphasis, accentuates it and fits other elements together to support the composition. While wide-angle and fisheye lenses can produce extremely dynamic images, the lenses are usually limited to 180º and are restricted to their mapping function (manner of distortion). That is why at some sites, Prof. Cheung had to change the elevation of the viewpoint to compensate for the distortion of the lenses. Another issue was that at one site (Ha Wo Che Village), Claire observed the scene through a netted fence, which the camera could not remove like the brain can. This forced the camera to capture the scene from a completely different perspective. The process of preparing for the exhibition has enabled increased cross-understanding between the artists, but has also revealed to them the strengths and limitations of their own mediums. This will encourage them to further pursue their mediums to their full and unique potentials.

This project aims to create a direct dialogue between photography and painting, providing a platform where these two nowadays inextricably linked mediums can be analysed side by side. We do not wish the viewer to ask how much the paintings look like photographs, but whether they can bring dimensions beyond what can be seen in a photograph. We do not wish viewer to only ask whether the photographs are beautiful or not, but to what extent they represent our experience of reality.