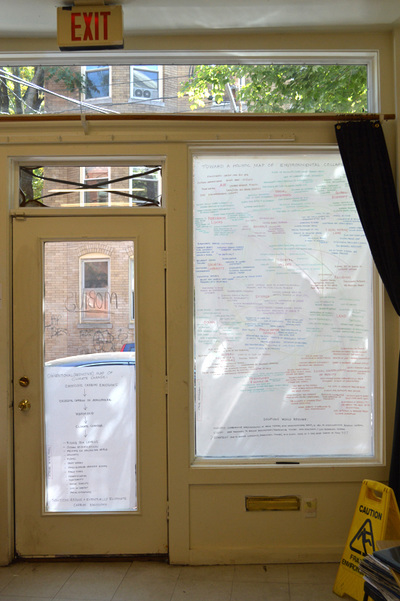 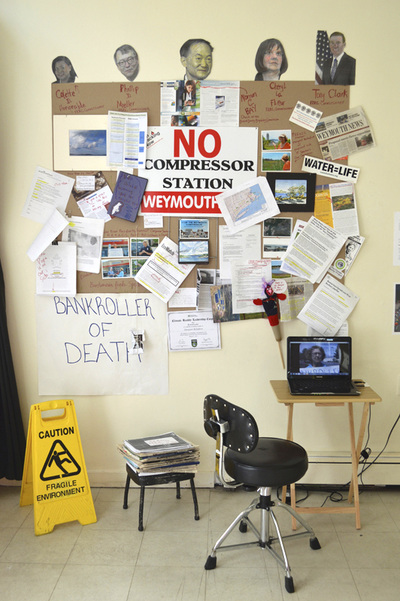 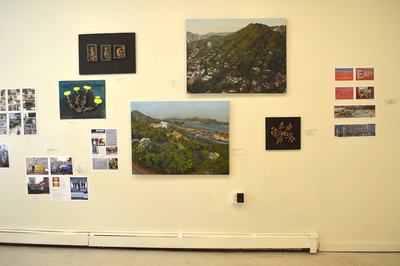 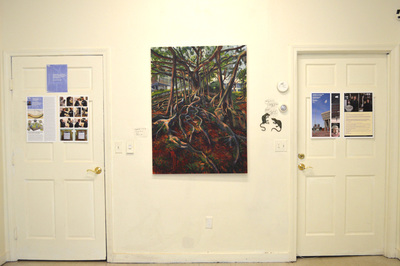 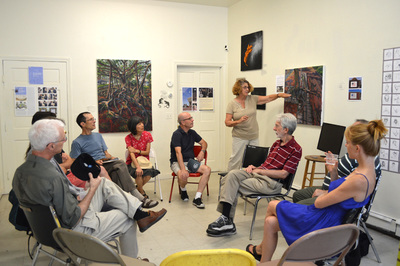 This exhibit is the outgrowth of a process between artists and environmentalists examining their own system of thought. Over several months, they have practiced an experimental form of dialogue to address questions arising from the overwhelm of climate disruption. In response, artists Margaret Bellafiore, Lydia Eccles, Milan Kohout, Claire Lau and Judy Werlin, with support from writers Steve Wineman and John Pitkin, have developed a variety of work including writing, sculpture, painting, video and performance.

The Dialogue is a response to physicist David Bohm and philosopher Krishnamurti, who worked together to address systemic faults in thought itself, and which they saw as the root cause of global incoherence (a proliferation of problems arising from solutions). Bohm conceived of Dialogue as a way to ‘see through’ thought, yet he never specifically defined a process, so the group is evolving its own practice template. Applying principles of insight meditation to their collective thought, the artists and environmentalists, who come from very different backgrounds, challenged themselves to become aware of assumptions caused by individual and cultural conditioning, and attempted to suspend their beliefs and judgments to listen with full ‘selfless’ attention to others, and to attend to their own defensive reactivity as it arises: thoughts, emotions, feelings, body sensations. When habitual defenses are dropped and beliefs are examined as beliefs, can a creative collective intelligence begin to flow?
The group has engaged in 4 monthly Dialogues since May, and a final dialogue will be held, open to public participation, on Sunday, September 20th, at 3:30 pm during the exhibition closing event.

The group struggled with issues of hope and despair, social activism, fracking, and the larger underlying dynamics of what makes a healthy society.
Technology came up immediately. With participants of different generations, the groups delved into negative and positive aspects of the internet technology. Globalization of the production process has enabled rich countries to export their manufacturing operations, emissions and waste to poorer countries, putting labor, environmental and climate issues out of sight of affluent publics. While acknowledging that computers, digital devices and the internet cause increasing detachment from our surrounding physical and social environment, younger participants underlined how social media can quickly organize and synergize grassroots movements all over the world, including the Arab Spring, the Umbrella Revolution in Hong Kong, and Occupy and Black Lives Matter protests here in the US. Through direct, instantaneous peer-to-peer communication in multimedia, action ideas spread imitatively and exponentially, undermining government and sanctioned media outlet attempts to suppress and control the popular flow of information. Could the internet undermine the nation state, as it has print journalism, bookstores, taxis, hotels and other mediating institutions?

Hope and despair also arose in the first Dialogue, as decades of climate action have failed to produce real impact on governments. As the group reflected on how older participants seem to express more despair(1), while the younger are still ready to act, they wondered whether experiences of failure and loss involved in aging, experience of the historic trajectory, and assumptions about the nature of social change may have conditioned the elders’ outlook for the future. And on top of youthful confidence, does the investment of a longer remaining lifespan generate hope?  In the third Dialogue, issues of despair resurfaced. How do we deal with the frustration, confusion and paralysis of the sense of helplessness? What do we do and what can we do? Is acting together only worthwhile if it changes the outcome, or is it inherently valuable in the present? The Umbrella Revolution energized Hong Kong youth with political awareness, collective action and creative renewal. Is hope a prediction or a form of faith and practice? Some suggested that we just have to see activism as a practice: allocate a share of your time, do it whether it fails or succeeds. At least you've tried. Is activism actually about being present and transforming the present rather than the future?

Community and its relation to activism emerged in a variety of contexts. Communities were an essential part of daily life decades ago, but collectivity is rarer now, unless we are faced with a tangible common threat, whether it be the construction of a fracked gas pipeline through a community in Weymouth, MA or the implementation of an undemocratic electoral law in Hong Kong. These clear threats have enabled very targeted action. One of the reasons why movements such as Occupy Wall Street were unable to accomplish much was that although they had community, they lacked a clear direction. Taking down capitalism and the market economy is too broad and vague an endeavor for targeted action. Issues of leadership were also discussed, with some saying that the movement’s failure was due to inability to forge strategy (as in the Civil Rights Movement), whilst others pointed out that effective movements in Hong Kong and the Middle East did not have one central leadership. Does the internet render older forms of leadership archaic?

Democracy as a governmental process became an underlying issue in the forth Dialogue. Although the U.S. seems to be a democracy on the surface, the complete lack of democratic processes and institutionalized corruption in the government makes the regulatory agencies like the EPA and FDA a subsidiary of large corporations and special interest groups. For example, the Federal Energy Regulatory Commission (FERC), which recently approved a fracked gas pipeline through Weymouth, is made of an appointed board of five men whose authority is completely non-democratic, and the “public hearing” they held was so rigid and hierarchical that the mayor and the townspeople were intimidated. Under this governmental structure, should people be accountable for what their government does, even on foreign policy like drone programs in the Middle East? Should we acknowledge that the U.S. is ultimately not a democracy? Would that help direct our efforts more effectively?

Education, whether through the school system or the media, is essential in producing the well-informed public needed in a democratic society. In the fourth dialogue, the grouped reflected on the American education system, how different political models such as capitalism and socialism are not introduced and analyzed critically, and how the ‘American system’ is never questioned. The group also pointed out how political groups profit off of and gain support from misinformed poor, rural, uneducated communities, the very ones being taken advantage of. With the mainstream media brainwashing the public and advertisements fueling a materialistic lifestyle, it seems essential to establish an education based on critical thinking.

While a specific target is needed to unite people for action, the group agreed that a complete vision or system of thought interrelating various activities is essential. "Fixing" climate change is impossible without changing the political-economic system that generates the harm. In the third Dialogue, the group looked at Pope Francis’ newly released Encyclical, in which he proposes a new system of thought. He depicts problems on earth, be it climate change or inequality, are rooted in colonialism.(2) Consumerism as a way of life depends upon inequality: slavery and taking advantage of others. The global north externalizes its environmental and social issues to the global south, while extracts labor and resources, to maintain its lavish lifestyle which can not be universalized - it already exceeds planetary limits. This relates to caste within the US, which initially gained its wealth through slavery, a sort of reverse colonialism where Africans were brought to America. Even after the abolition, the privileged continue to get wealthier through exploiting the lower class, using racism to keep groups at the bottom. Thus we see ever evolving new forms of colonization. And beyond near slavery conditions for many who labor, is there a growing subcaste of the disposable?

In this exhibit you can see the artists’ and writers’ response to activism, democracy, technology, fossil fuels, and the larger crisis as a whole, in which environmental and social problems are one interdependent process. A Bohmian premise of the dialogue is that all that humans design, build, make and do, material and immaterial, is the manifestation of collective thought. Is climate change the tip of the (rapidly melting) iceberg? At this stage, can we avoid calling our ruling system of thought into question?

The exhibition will include performances by the artists, talks by Jay Critchley, and a movie screening.

(1) But not the oldest!
(2) The group considered the ideas themselves, as expressed by the Pope, consciously separating them from problems of the history, politics and dogma of the Catholic religion.

COLLAPSE DIALOGUE #5 at 3:30
Our collective system of thought and belief is rapidly giving way... now what do we think? (Open to public participation)